Zorro Berlusconi dances masked in Morocco for his wife. Our national arlequin found yet another disguisement. Many think that he could have been a great show man, many think he is. Read here for more details on the 'genius' of entertainment.
Posted by Unknown at 3:49 am No comments:
Labels: Italy

Apologies to our readers

Due to summer holidays, we decreased the number of our postings.
We'll be back soon with plenty new insights!

Please keep visiting us
Posted by Unknown at 5:15 am No comments:

Should the U.S. Welcome a More Assertive Japan?

Despite the extensive coverage of North Korea’s missile tests last week and the responses of the various concerned countries – the E.U., U.S., Japan, China, Russia and South Korea - an important aspect of this story remains unexamined. The media has covered Japan’s tough reaction to the tests - it has proposed a U.N. resolution that would impose sanctions upon Pyongyang and publicly pondered the advisability of pre-emptive strikes against North Korean missile launch sites – and subsequent Chinese and South Korean criticism of Japan. However, the growing public popularity of a more assertive Japanese foreign policy, and the politicians who espouse it, has been largely ignored. This is an important development from the American perspective and one that deserves closer analysis. Almost immediately after the end of World War Two American policy makers recognized the need for a rehabilitated, strong Japan to serve as a counterweight to Soviet power in Asia. Thus, even as they oversaw the writing of the Japanese Constitution, which includes the famous Article 9 forbidding war or the threat of force in international disputes, U.S. policy makers began pushing Japan to be more assertive on security issues. American encouragement of a bigger Japanese role in the East Asian security scene, and Japanese rejection of such a role, is a central theme of U.S.-Japanese relations over last 60 years. President Bush, like his predecessors, has pushed Tokyo to play a more active role in international security. He gained an important, if largely symbolic endorsement of this stance from Japanese Prime Minister Junichiro Koizumi in 2003 when Koizumi convinced the Japanese Diet to allow him to send an essentially non-combatant contingent to Iraq. This marked the first time that Japan sent troops abroad since 1945. Now, nationalist politicians are using the Japanese public’s hostility toward North Korean (which has, amongst numerous unneighborly acts, abducted a number of Japanese citizens over the years) to garner support. Chief amongst these are the popular Tokyo Governor Shintaro Ishihara, Japan’s most famous nationalist, and Koizumi’s chief cabinet secretary Shinzo Abe, widely considered Koizumi’s likely successor, who made his career largely on his hawkish stance toward North Korea. Abe and rival Taro Aso, the Foreign Minister, raced to be the first to condemn the missile tests last week. To the Bush administration this growing foreign policy assertiveness, especially on North Korea, must seem like a boon. However, while Washington will probably welcome this tougher approach from Tokyo, it should recognize the complications that will accompany such a change. That China and South Korea seem as nervous about Tokyo’s response as they do about North Korea indicates the deep historical cleavages that influence foreign relations in East Asia. Japan’s wartime atrocities in China, South Korea and elsewhere are common knowledge. However, less understood is the fact that the Japanese, unlike the Germans, despite their pacifist image, have failed to fully examine and acknowledge their forebears' World War Two behavior. Aside from the annual media coverage of Japanese Prime Ministers visiting Yasukuni Shrine (which honors, amongst many others, 14 men executed for war crimes), most foreigners fail to grasp the depth of the problem. This is highlighted by the fact that Ishihara, Abe and Aso, all successful politicians, have all made statements about Japan’s role in World War Two that would be career-enders for any German politician. It is not accidental that, despite close economic and cultural ties, Japan’s relations with China and South Korea are barely civil. With the growing popularity of nationalist politicians and public acceptance of their rhetoric (and presumably policies) on many issues, U.S. policy makers need to account for the increased friction that seems likely to accompany Japan’s more assertive foreign policy. After all, the relationship with Japan is the central component of Washington’s security policy in East Asia. The U.S. itself has complex, often troubled relations with China and South Korea and it does not need the added burden of worsening relations between them and Japan. If Japan continues to embrace a more assertive, nationalistic foreign policy, Beijing and Seoul will react sharply. Mediation by the U.S. – the linchpin of East Asian security relations – will require intensive diplomacy to bridge differences between Japan and its neighbors. Unfortunately, such engagement is unlikely from a Bush administration occupied with other problems and not especially adept at bridge-building . Look for rougher waters in East Asia in the next few years.
Posted by Jack Thompson at 12:40 pm No comments:
Labels: America, International Law 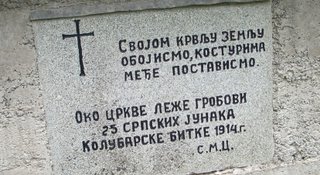 "With our blood we coloured the soil, with our bones we marked the borders. Around the Church lie the tombs of 25 Serbian Heroes of the Kolubara battle 1914."

Montenegrin referendum demonstrated that peaceful secession through a democratic process can be a realistic alternative to the separation or unification of states through the agreement of political elites or to violent secession through war. The same could occur in the Serbian breakaway province of Kosovo and Metohija, although it is uncertain of what the eventual outcome of its independence will be? Invoking the principles of international law the Serbian government defends a strong and legitimate position that an imposed independence of Kosovo remains unacceptable.

Can the processes in the Balkans trigger similar developments in the rest of Europe and the world? Autonomous provinces of Spain, just to offer an example, looked with great interest at the events of the Montenegro referendum and it is not excluded that some time in the future constituent parts of EU member states might ask for independence.

The European Union, it can be argued, possibly represents a safety niche that can accommodate such independence claims without disrupting the political stability of these countries. As to whether this is possible in other areas in the world, one should be extremely sceptical, since we are still living in the era where nation states have absolute power and beyond the nation states individuals have very little rights. Borders still matter very much and embarking on a project of democratization of sovereignty is very dangerous outside of the context of the European Union. Independence claims of any territorial entity must be resolved taking into account the interests and political stability of the larger state from which it wishes to secede. Internal enlargement might play the role of a compromise solution but this is unfortunately realistically conceivable (in the long run) only within the boundaries of the EU, nowhere else.